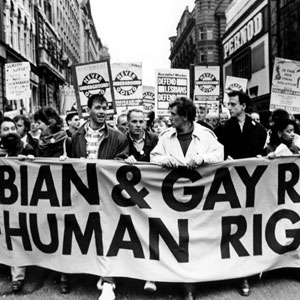 ‘Coming Out Day’ is celebrated globally in many countries on October 11, with 2016 marking the 28th anniversary. In the UK, however, it was untill recently celebrated in February and has been observed within ‘LGBT history Month’  as it coincided with the celebration of Section 28 being abolished in the UK back in 2003. Now Section 28 is an historic debunked law that affected many LGBT youths that were ‘questioning’ their sexuality, so I thought it would be appropriate to take a look at this act.

In 1988, the call for Section 28 was fuelled by such beliefs the myth that AIDS and HIV were “gay diseases”, with some people even believing it was an act of God. The stigma behind these beliefs were further escalated by certain media circles taking a negative stance. In an opinion poll carried out the year prior, 75% of the public believed that homosexuality was almost (or) always wrong. Only five years previous it was much less.

It was feared by some parents that some more liberal councils would spend their taxes on “encouraging their children into homosexuality and being taught that a normal family with mummy and daddy was outdated”.  There was also  an unfounded opinion that connected homosexuality with paedophilia.  Some groups also felt that the very notion of “promoting” homosexuality was undermining marriage. Please note that at this point in time, we were a long way away from equality in marriage that has become a more recent occurrence here in the UK and other countries.

Section 28, also known as Clause 28, was intended to prohibit any schools or youth organisations promoting homosexuality in any way. The amendment was enacted on 24 May 1988.

Part of Section 28 reads “homosexuality shall not be promoted in the teaching in any maintained school of the acceptability of homosexuality as a pretended family relationship”.

The use of the term “promote” in the wording was open to interpretation, as Tony Ben pointed out when the bill was being debated in parliament;

“…if the sense of the word “promote” can be read across from “describe”, every murder play promotes murder, every war play promotes war, every drama involving the eternal triangle promotes adultery; and Mr. Richard Branson’s condom campaign promotes fornication.” The House had better be very careful before it gives to judges, who come from a narrow section of society, the power to interpret “promote”.

The pro-Section 28 side argued that “The act didn’t stop legitimate discussion of homosexuality and did not prevent the intervention of children being bullied. At the time the public in general appeared to be behind the law”.

Even though there were no prosecutions through fifteen years of it being part of legislation, some supporters will insist even today it was necessary in order to “protect” youths from homosexuality. Conversely, equal rights groups will posit how the youth questioning their sexuality at the time were made to feel isolated and vulnerable and therefore damaging to a minority in a bigoted and unfair way.
The existence of the act meant that many youth groups closed, limited or censored themselves in fear of being in breach of the act, and were unable to help teens come to terms with their identity.
Additionally, the act caused confusion amongst teachers that feared repercussions if they simply got involved with helping a child who was questioning their sexuality. Worst still, it is feared that some bullying could have slipped through because of teachers wishing not to get involve.

There is evidence that the confusion of teachers knowing what they could or could not teach in schools lasted years after the act was debunked. Some teachers would continue to avoid subjects of sexuality.

After years of campaigning on both sides the act was finally overturned in 2003. The local Government Bill received royal assent as the Local Government Act 2003 and Section 28 ceased to exist on Thursday 18 September 2003.

On the death of Margaret Thatcher LGBT+ campaigners made their voices heard of her involvement with this act, with David Cameron later issuing an apology to the LGBT+ Community in the UK.